Aggressive Magpies are a HUGE OH&S issue. Spring is Magpie breading season, During this time some male Magpies feel the urge to protect their nests, they do this by becoming very aggressive. 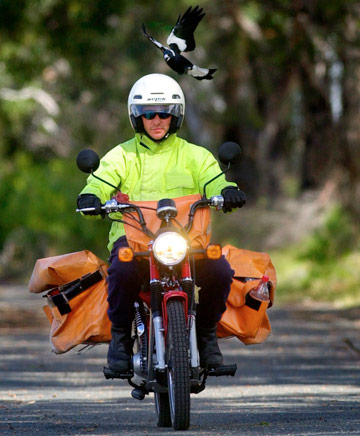 Magpies attack any animal including humans, cats and dogs. Seemingly the faster a target moves the more they attach. They seem to be aggravated by the sounds of motorbikes, This makes postmen on motorbikes a favorite target.

Aggressive Magpies will generally attack from the side or from behind taking a target by surprise, with the target not knowing they are being attacked.

Magpies pose a huge risk to workers OH&S with at least one human eye being lost every few years due to a magpie attack.

Many believe and will tell you that an aggressive magpie will only attack for a few weeks during breeding season. Australian Feral Management have notice that magpies will attack for up to three months.

Magpies will also teach their offspring to attack, as attacking is a learnt behaviour. The quicker a aggressive adult can be removed, the less chance there is of its offspring being wrongly educated.

What Australian Feral Management do to remove Magpies:

If you have problems with Magpies call Australian Feral Management today on Phone: 1300 669 546
Or send us an email using the contact form on the right.